If I remember correctly, this project had to do with local locations.  We were supposed to make something that had to do with sites and/or areas that were local to use and that we inhabited or visited often.  I chose to base my piece off of UF’s campus and surrounding areas since that’s where I spent the majority of my time.  I ended up making a game with Unity.  The ground is textured with a map of the university.  The game starts you off at the location of the apartment complex I was living in at the time, The Courtyards, which is literally across the street from campus.  You are then free to roam around the “campus” as you please.  In order to visually mark the areas that you visit/inhabit most often, the elevation of the ground near you continually rises.

Controls: Move/walk with WASD and/or arrow keys, jump with space, look around with the mouse, and switch to an overhead view of the map with enter (switch back to first-person by pressing enter again).

Here are my original ideas for this project:

For this project, I went through quite a few different ideas over the course of the few weeks.

The very first idea I had was to do something with the thousands of pictures and video footage I have from Japan. While these things are not local in respect to my current whereabouts, there were five weeks over the summer in which these areas were very much my local; it will hopefully become my local again sometime in the future as I plan to go back and possibly live there. My original thought was to basically recreate my experience in Japan by means of putting together what I would consider a virtual memory (hopefully I can make this term become more clear in its definition). I wanted to piece together all of the photos and video I have in chronological order. The result would be the visualization of images and video in the order they were taken, which, in turn, would take the viewer through a virtual experience identical to mine in Japan. For example, we first arrived in Narita airport (the viewer would see hundreds of images/videos; enough so to hopefully allow the viewer to create a mental space for this place they’ve never visited.

Imagine, if you will, if it were possible for someone to record exactly what they see, from their eyes. Unlike a video camera, this video would not be from an external device, held out at an arm’s length, constantly bouncing around due to arm/hand instability; this video would be from the person’s eyes. Whatever the person were to look at, the video would see; anything that’s out of the person’s field of focus would be blurry, anything that’s out of the field of view would be unseen. For all intents and purposes, the viewer would be looking out of the “cameraman’s” eyes. Now what if there were no limit to the amount of video recorded? What if a person could record their entire life that could be later viewed by the individual as well as others? If this technology existed, how would (if at all) this change experiences? For example, would watching a recording of someone who visited Japan be the same as going there in person? If the experience is so complete, how would it be any different?

This technology wouldn’t be true virtual reality, but it would certainly be very close. While there is no tactile responses from this recorded footage, it would be insurmountably more complete an experience than simply looking at a few snapshots and some videos from a selection of a dozen or so.

Obviously, the idea for this project has some flaws (it is NOT this technology, it is NOT a complete visual experience of my trip, etc.), but it is working towards it. This is the kind of thing I was thinking about when I wanted to do this idea. That being said, I did take tens of thousands of pictures and hundreds of videos –waaaaaaay more visual record than any other person would take over a five week period; I believe this huge amount of data I have would be a very complete experience of my trip, and I thought about that while taking the pictures/videos –I wanted to capture everything, even if it wasn’t or didn’t seem important –I wanted every experience recorded.

Often people (usually tourists) who do nothing but take pictures are made fun of or pitied because they are experiencing everything through a camera. The point (or at least the supposed point) of going somewhere different is to experience that place first-hand, yet how can one do that while constantly looking through a camera lens? The camera-person is more fixated on getting things in the frame, stopping to pose, or thinking about what to take pictures of than actually experiencing the place. Also common in this kind of discussion is the notion of authenticity. The only way to have something be “authentic” is to experience it first hand –to see it with his or her own eyes and remember the experience by pure memory alone. These experiences become tainted, sometimes even skewed and distorted thanks to the aid of things like photos and videos. You may remember something different than the way it actually happened, you may notice something later that you didn’t notice the first time. These things may distort your original experience –perhaps in good ways, perhaps in bad; regardless, the distortion is still occurring, which, many would say, detracts from the authenticity of the original experience. With that said, the person who is constantly taking photos is missing out on these original, authentic experiences in order to relive them later in a (usually unknowingly) less authentic and certainly less real way.

I’m not saying I didn’t succumb to this, but what I will say is that I was completely aware of it. I KNEW I was taking a lot of photos, I KNEW I was missing out on some authentic experiences, I KNEW reliving the experiences through photo would not be the same as experiencing them in the now. Because I was aware of this, I protected myself from it (or at least constantly tried to). What I mean is that many (many, many) of my photos and videos are shot without my even looking at the camera; I was looking at these things with my own two eyes but at the same time, aiming the camera at it, snapping a shot, and hoping for the best. Obviously many of the photos didn’t turn out ideal, but I did get quite good at getting the photo I wanted. By these means, I was almost using this imaginary technology mentioned above –I was recording my experiences very fully, but I was doing so without losing the chance to experience the authentic (as would be the result of a constant video feed from one’s eyes). Defending myself is aside the point. What IS the point is that I knew what I was doing in anticipation of creating a very full experience for both myself and others by means of a project like this. 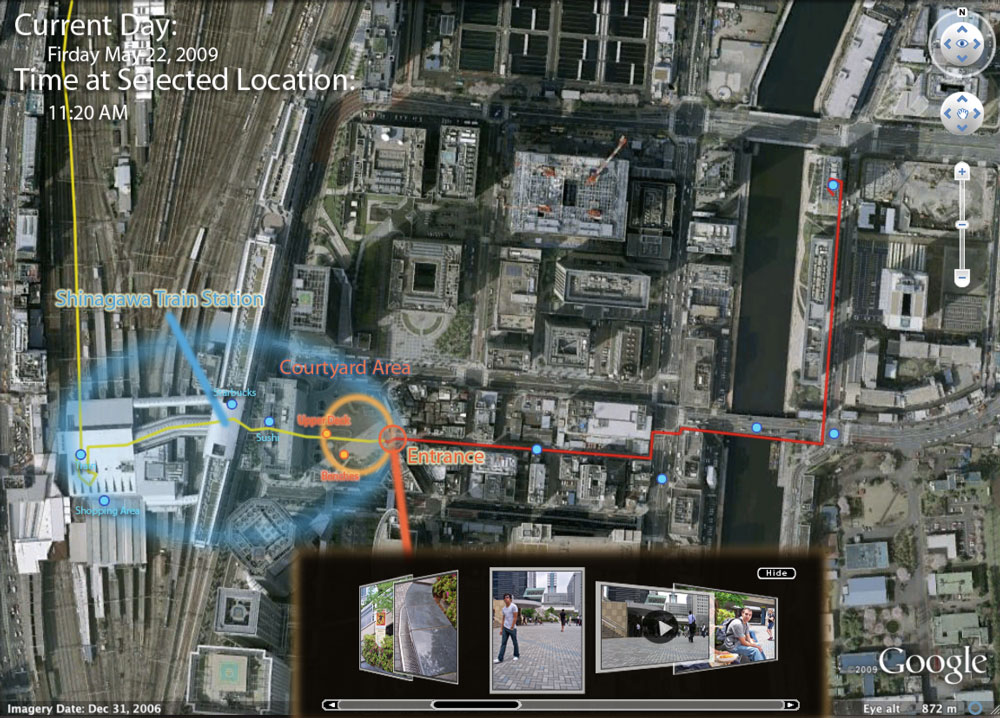 My second idea had to do with a locale much closer to home. In short, what I would do for this was map my individual paths throughout the course of the weeks before the crit via GPS. Visually, I had imagined it to look like what Katie’s project turned out to be. However, I did not plan on having a static image. This would be something interactive. The viewer would be able to toggle different paths on and off (to view all, some, or just one at any one time). These paths would also hold information about what activities I was doing while inhabiting these different areas (personal activities, schoolwork, relaxing, sleeping, eating, walking, driving, etc.). The different activities would be denoted by different colors. In addition to this, I had planned on deforming a map of the area in accordance with my GPS findings. The longer I was in a certain area, the more deformed that area would become. I had thought about two different ways to deform –locally and globally. The former basically meaning that the deformed areas would appear bigger but would not take up more than their original space on the map. The latter meaning that the deformations would bleed into adjacent areas. Here are examples of each – original, local deformation, and global deformation: 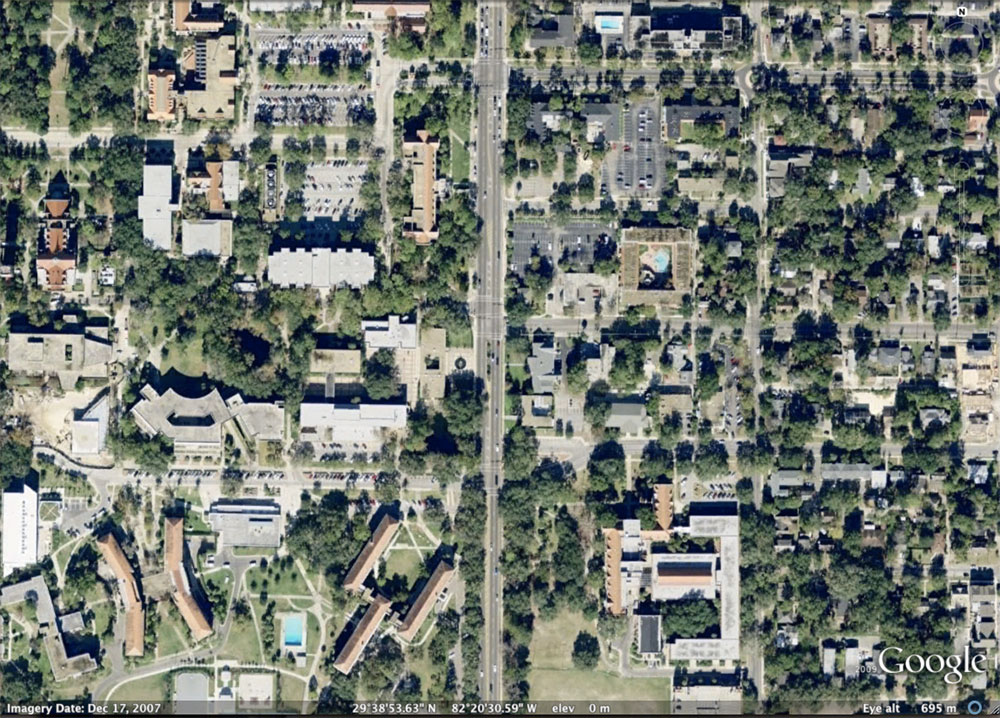 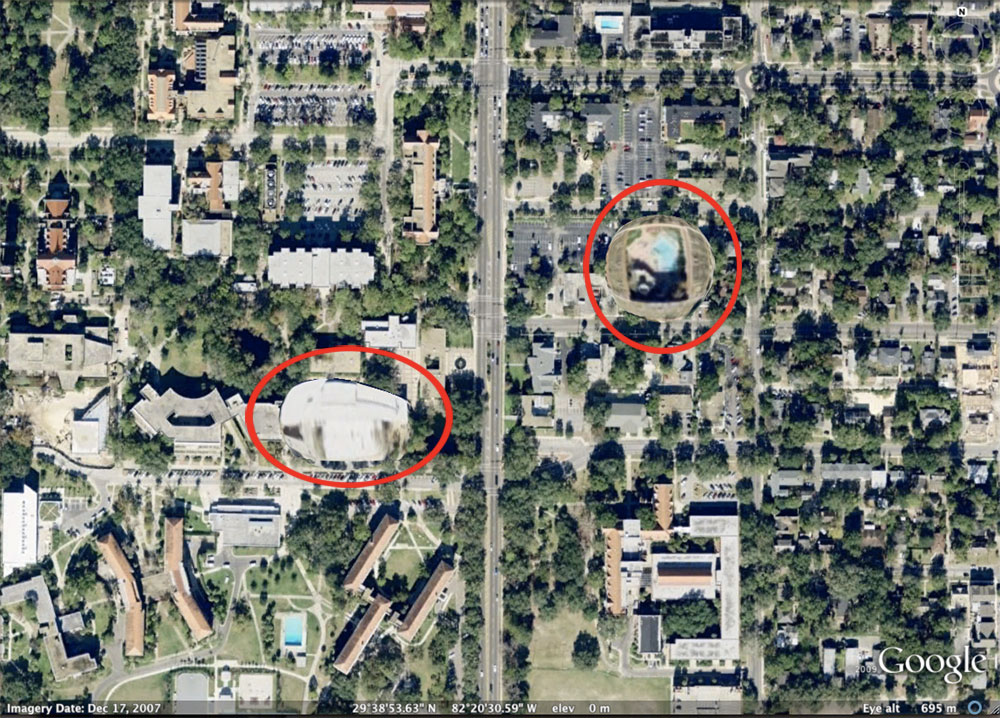 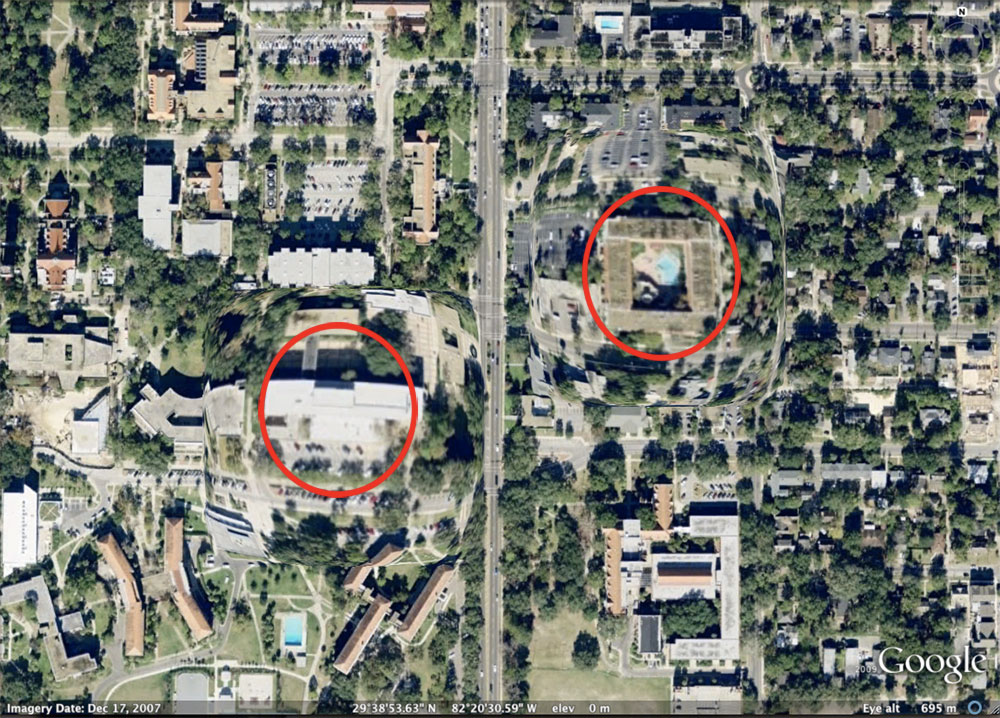 I thought this project would be interesting for a few reasons, one being I’m curious to see how exactly I spend my days.  I consider myself somewhat unusual in that I hardly ever go out anywhere.  This is especially true this semester as myself as well as all of my friends are constantly busy and hardly have time to hang out.  The vast majority of my time is spent either in my room or in FAC 302 (I have all of my non-online classes in this room this semester).  Over the course of the three and a half years I’ve been here at UF, I have easily spent the most time in either FAC or my room (Jennings Hall for two years and the Courtyards apartment complex for the last year and a half).  How long exactly do I spend in these places?  How long is it compared to other places I visit throughout my days here?  Where all do I go other than my apartment or FAC?  How many times have I gone over the exact same path to get from one place to another?  How many times have I stepped on the mulch surrounding the Courtyards’ plants?  How many times did I ride over the on Jennings’ lawn?  How many times have I traveled up and down the west staircase of FAC?  Have I created some kind of path over the years?  Have I affected the ground over which I tread at all?  If so, how?
I’m also interested to see how much time I spend doing certain activities.  Time and time again, I find myself working on projects for hours on end.  An entire day goes by without me even realizing it.  The same often happens when I play games or read books that I really enjoy.  Time just completely escapes me.  I’m really eager to see what those numbers would be as well as those indicating how long I spend in a certain place.  People say that humans sleep one third of their life away.  I think it’d be neat compare that to my sleep cycle.  Regardless, I think people (myself included) would be surprised by the results that arose from this project.